We all know that MySQL says it is "the world's most popular open-source database". And PostgreSQL has a firm hold on second place while claiming to be, instead, "the world's most advanced open source database". But the horse that comes in third can return some money to gamblers who bet "to show". And the horse that shows momentum or gets close is worth watching for next time.

So I'll just ignore the dolphin and the elephant in the room, and go on to a harder question: who's number three?

So here is the count of accesses on the Wikipedia pages of the nine contending SQL DBMSs, for September last year (blue) and September this year (red). 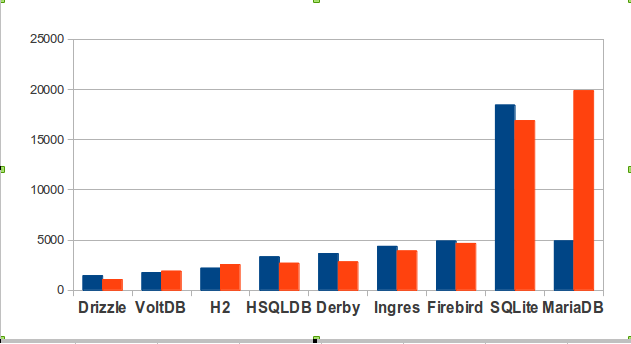 In absolute terms, MariaDB is only slightly ahead. But if you look at momentum (what direction the hit counts have gone between September 2012 and September 2013), interest in MariaDB has risen a great deal while interest in most other DBMSs has declined.

Now here is the chart for open-source NoSQL DBMSs, made the same way. This time I can't be comprehensive -- there are 150 NoSQL products! I'll show only the ten with the most hits.

Of course MongoDB is in front. The surprise is that MongoDB's in-frontness isn't glaring.

According to The Register

To find out how many times the mass media mentioned a DBMS, I can go to google.com and enter site:theregister.co.uk [DBMS name] -mozilla. Simply googling the DBMS name would fail because Google seems to become more inexact as numbers get bigger, and because "Ingres" and "Firebird" and "Drizzle" and "Cassandra" have alternative meanings that have nothing to do with databases.

So this term is more specific, it's asking: how many times does search-term appear in The Register (in a non-Mozilla context)? For this purpose I'm positing that "the mass media" and the well-known medium "The Register" are synonymous terms.

To find out how much activity an open-source project has, I can go to ohloh.net and look up the count of commits in the last year. (Ohloh "provides a single aggregate source of information about the world's open source projects from over 5,000 repositories and forges including GitHub, SourceForge and Google Code, as well as open source foundation repositories including the Eclipse, Mozilla, Apache, and Linux.") This method has been justly criticized, but is an indicator for developer enthusiasm. Again I am only showing the top ten, other than MySQL or PostgreSQL, for any kind of open-source DBMS.

An Austrian company named solid IT maintains a site named db-engines.com. On it there is "a list of DBMS ranked by their current popularity ... updated monthly." Their ranking is based on (a) Google and Bing hits, (b) Google Trends, (c) Stack Overflow and DBA Stack Exchange (counting the number of technical discussions), (d) indeed.com and simplyhired.com (counting the number of job offers), (e) LinkedIn (counting the number of people who mention the product in their profiles). In other words, none of their criteria match the criteria that I prefer. If one excludes closed-source and MySQL and PostgreSQL from their list, their top 10 hits are:

Woe and alas. If their results had been similar to mine, despite their different criteria, then that might have validated both our methods. But they're very different. I think that's because my criteria are the only valid ones, but obviously I'm not the only evaluator.

According to the makers

"MongoDB is the leading NoSQL database, with significant adoption among the Fortune 500 and Global 500."
-- mongodb.com

MariaDB is in third place among the open-source SQL DBMSs, and would be third overall if we gave more weight to the numbers "according to Ohloh" and "according to The Register". But MongoDB and Cassandra nose past it "according to Wikipedia", and MongoDB is definitely the third-place finisher "according to db-engines". The claim of SQLite is strongest "according to the makers".

We have a photo finish, with a blurry camera.

Co-author of four computer books. Software Architect at MySQL/Sun/Oracle from 2003-2011, and at HP for a little while after that. Currently with Ocelot Computer Services Inc. in Edmonton Canada.
View all posts by pgulutzan
Regular (RLIKE and REGEXP) expressions: Good News →
← Triggers: Comparisons, New Features, and a Trick